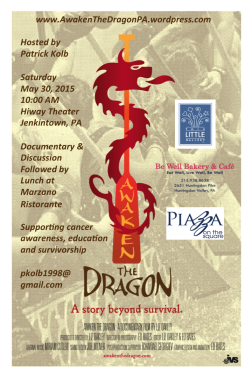 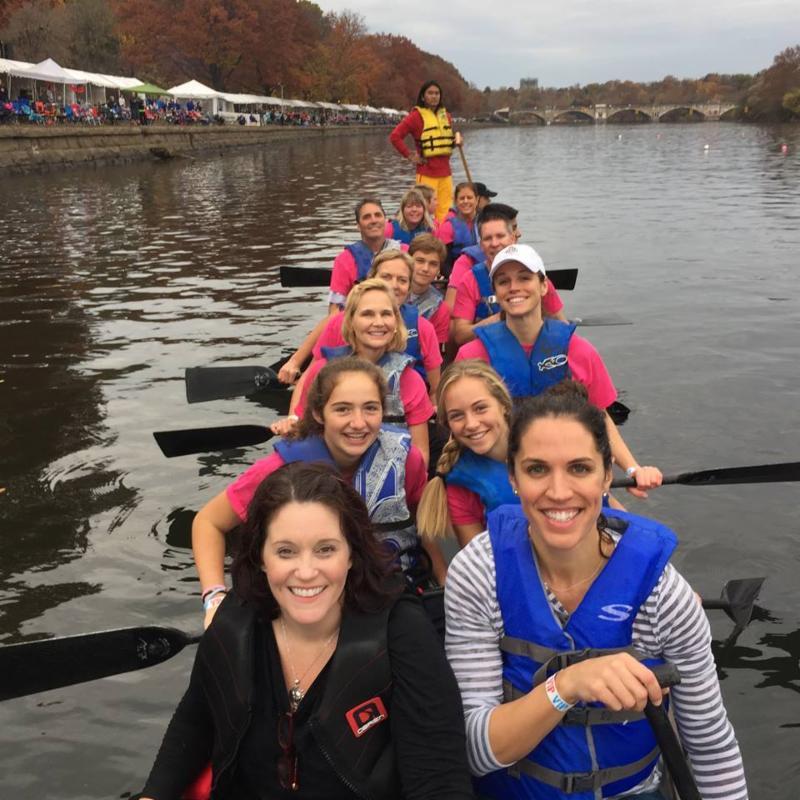 My Journey and Mission
My name is Patrick Kolb. I am a 16 year old and just started my junior year in high school. Three years ago, I found a wrist band during a lacrosse tournament that read "Awaken the Dragon." I became interested in what the phrase meant and stood for. Later that day, I googled the phrase and found the documentary and foundation of the same name. Everything they have done inspired me. My grandmother passed away from cancer at the age of 37 and my mother tested positive for the BRCA2 gene. This motivated me to bring awareness to this film, foundation, and cancer research. I started my own Dragon Boat team and will race in the 2015 Philadelphia International Dragon Boat Festival under the Awaken the Dragon name. I am truly blessed to support the mission of such an amazing foundation. Thanks to all who support me in this effort.
The Basser Research Center
I am so excited to support this cause and such a talented team of researchers. All of the donations I receive will go directly to the Basser Center to help them with their efforts.
Basser and Cancer Facts

"Marilyn Virginia May was said to be different, this ranging from her beliefs to her actions. She was a strong woman who disagreed with racism in the 1960’s, an era where racism was so common and thought to be a requirement in society. Since one of her best friends was a black artist that lived down the street by the name of Johnny Johnson, she had been going against the society that she lived in and their beliefs and common thoughts. I have every reason to believe she was a strong, independent woman that was not afraid to stray from social norms. She was my grandmother, but I was never able to meet her.

She died of breast cancer at the age of 37. She died a single mother with three young children at home – ages 7, 11, and 12.  Three of her four aunts were diagnosed with breast cancer in their thirties or forties, and her sister went on to die of the disease in her early fifties.

My mother inherited her mother’s breast cancer genetic mutation.  She tested positive for the breast cancer gene in January 2012. My mother is BRCA2 positive, putting her at 85% risk for   5c   breast cancer and 35% risk of ovarian cancer. Breast cancer is curable if caught early; ovarian cancer is deadly and difficult to detect.  My mother is a cancer researcher at the University of Pennsylvania, and so she understands her risk of the disease. She also understands her treatment options and what those options would mean to her health.  She knew that her probabilities for getting cancer were near certainty.  She knew that even if she found her cancer early, the treatment would most likely include surgery, chemotherapy, and radiation therapy because of her deadly family history.  Chemotherapy and radiation work by destroying fast-growing cancer cells. Unfortunately with treatment, other types of fast-growing healthy cells also can be damaged along with cancer cells, causing side effects. Side effects can range from short-term flu-like symptoms and hair loss to long-term symptoms including fatigue, swelling, confusion, and memory loss. My mother believed that if she waited for her cancer to emerge, along with the anxiety she would endure, her quality of life after treatment would never be the same.  So she decided to take six months from her life now and have both breasts removed, along with her ovaries, reducing her risk of breast and ovarian cancer to a level below the general population.  My mom made the choice to be healthy for me, my sister, my dad, and for all of our family and friends.  She believes that she was given the gift of “choosing health”.

October is breast cancer awareness month, and it is important to me because I know that I am at a higher risk for getting various cancers than the average person based on my genetic profile. My sister, aunt, uncle, and cousins are also at high risk. I plan to bring awareness to the importance of genetic testing by wearing pink, wearing and selling my pink “Awaken the Dragon” band (with donation of proceeds to the ATD organization), walking for the cause, and speaking about the importance of genetic testing whenever I can.

I hope that all of you will help me bring attention to cancer in coming years in as many ways possible.  I also hope that my efforts will help in some way make people more comfortable with the discussion of genetic testing and making the choice to be healthy. "

The Duke’s Lacrosse Club swept two games and more than $4,000 was raised in the Dan Carr Benefit at Cabrini College Friday as the Philly Showcase weekend kicked off in style.

During the event it was announced that Penn Charter was starting a “Score for the Cure” campaign where players raise money for the Dan Carr Fund by getting sponsors for each goal they score in 2011. Also, wristbands wil be sold for $5.\

“I’ve known Mr Carr since I was in third or fourth grade,” said Penn Charter senior Joey Sankey, who plays both for Rebel Elite and the Duke’s L.C. and has signed with North Carolina. “Mr. Carr has always been the most positive and passionate person about lacrosse and about life.

“It kills me to see what he’s been going through, but as always he’s been positive about it.

Said Shane Carr: “It’s awesome how the lacrosse community in the area reached out to us. To see all these people here is cool. But this is also a great event. It was great looking at the sidelines and seeing so many coaches.”

To learn more about the efforts to help support the Carr family, click here to learn about the “Dan Carr Fund to Fight Brain Cancer.”

The Duke’s L.C. got three goals from Dan Kinek (Emmaus senior) and two more from Jeremy Omrod (Holy Ghost Prep junior) in its 6-2 win over the Inter-Ac stars. Goalie Victor Garcia (La Salle senior) did not allow a goal in the first half.

“I was fortunate enough for (coach) Ebe (Helm) to ask me to come out and play,” said Kinek, who scored four goals and is looking for the right Division I school. “I was all pumped up.

“There were like 80 coaches; it was awesome. I was nervous at first, but once the game started I got into a groove and everybody played well. It was great exposure. It was weird playing at 9 o’clock at night, but the whole team played well.”

Garcia, who saw regular time last year for La Salle but was not the starting goalie, also is searching for a Division I home. He will play today in the Philly Showcase.

“I just wanted to get some looks,” said Garcia, who also will play in a recruiting event Sunday in Maryland. “I wanted to get out and have a good showing and get my swag back in a big-game situation under the lights.

“Overall, the defense played well, the offense was firing and the whole team played great. This helps (in getting seen); it’s even bigger because (I wasn’t a starter).”

The Inter-Ac stars rallied for the win over Rebel Elite after falling behind, 3-1, in the first half. Jake Glancy (Malvern Prep junior) scored twice for the Inter-Ac in that game and Connor Crump (Germantown Academy junior) scored once in each game.

“It was a lot of fun playing with a bunch of guys you usually play against in the season,” said Crump, who is playing today in the Showcase. “I have heard from a couple schools, and I am waiting to see how the process works out.”

Frankie Magazu (junior from Kingsway, NJ) had a goal in each game for Rebel Elite.
“I wanted to get some college looks and it was great competing with some of the best teams in Philly,” he said.

“We’re all just trying to get looked at by college coaches,” Wydra said. “he exposure here was great.”