Ricky Whelan Dukes Developmental Clinics are used to instruct ALL players on advanced skill development, while working on weaknesses and refining basic fundamentals to be effective in a PLAY FAST environment.   Players will be selected to Dukes Program  rosters (Little Dukes, Young Guns, Dukes ELITE HS & Dukes regional teams) during the clinic sessions who consistently demonstrate the ability to execute in drills, display their athleticism, and have coachable traits we are looking for in a student-athlete.  NCAA COACHES will swing by the high school clinic sessions to give encouraging words and advice to players and parents about playing hard, having fun and representing themselves & families with great character and class. 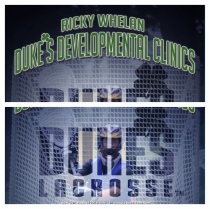 Richard “Ricky” Whelan Jr. ’04 was proof that there is so much more to Brown than academics and athletics. The gregarious and kindhearted 22-year-old passed away suddenly in his sleep at his home in Pennsylvania on Jan. 11, leaving behind countless friends, family members and teammates whose lives he touched in myriad ways.

Whelan spent four years on the lacrosse team at Brown, playing in 53 out of 56 possible games, missing three games due to injury. He was also an active member of the Theta Delta Chi fraternity. He graduated in May 2004 with a degree in Public and Private Sector Organizations.

“I always thought of Ricky as a great kid,” said men’s lacrosse Head Coach Scott Nelson. “He always had a smile on his face. He seemed to get so much out of Brown. He was always at the center of everything. The kids really liked him.”

On the field, Whelan was a defensive midfielder who made his impact felt far beyond his statistics or his size.

“He was not a big scorer, but he was the kind of guy who did everything else,” Nelson said. “Even though he only weighed about 155 pounds, he always tried to hit everybody. He was the kind of kid you love to coach. He just loved to play lacrosse.”

Ricky’s blue-collar work ethic was acknowledged at the end of his senior season when he was awarded the lacrosse team’s Unsung Hero Award.

“He epitomized that award in that he did the dirty work,” Nelson said. “He was an unsung hero both on and off the field. It didn’t matter if you were a freshman or a senior, if you needed someone to talk to, you went to Ricky.”

Whelan’s enthusiasm and loyalty was not limited to the lacrosse team. He worked as a ball boy for home football games – not for the money, but so that he could get as close as possible to support his friends. Although he never set foot on the field during the game, Whelan’s friend and former teammate Rich Tuohey ’04 recalled that he would do all he could from the sidelines to will the Bears to victory.

“Our junior year, we were playing Cornell in a torrential downpour,” said Tuohey. “He started dropping the ball on the ground before giving it back to the ref. Cornell started turning the ball over and he started getting more aggressive. By the end of the game he was just raking the ball in the mud and Cornell ended up with eight turnovers. It was just an example of how Rick would do anything for his friends.”

It would not be the last time that Whelan would engage in some exploits on the football field.

“One day I was doing marketing at the football game and I needed someone to participate in a punt, pass and kick contest on the field,” said former teammate Chazz Woodson ’05. “He agreed to do it before I could even finish explaining what it was, and he had a smile on his face the whole time.”

Whelan’s fierce loyalty and big heart drew more than 1,000 people to a memorial service at his former high school on Jan. 15. So many people were in attendance that some could not even get in the door.

“He just came across as friendly and genuine and he would always be willing to do anything for you,” recalled Tuohey. “He would burn CDs and send them to my brother who is stationed over in Iraq.”

Whelan came to Brown from the Episcopal Academy in Merion, Pa. He was a three-sport athlete, participating in soccer, ice hockey and lacrosse. Lacrosse was the sport where he stood out the most, garnering various accolades including two First Team All-InterAc selections, and his team’s Most Valuable Player award.

An honors student as well as athletic standout, Whelan’s accomplishments also extended into the arts, where he was awarded the James H. Mk. Quinn Prize for the greatest contribution to his school’s drama program.

After graduating from Brown, Whelan went to work at Binswanger, a commercial real estate company. The job was perfect for Whelan because it blended his ability to connect with those he came in contact with, while at the same time using his competitive fire to make sure the job got done.

Whelan could often be spotted walking around campus wearing an orange Philadelphia Flyers hat. The cap was a perfect accessory for someone who was never afraid of the spotlight and always stood out as being larger than life.

“He was one of those kids who wasn’t a big guy, but the way he attacked everything made up for it,” said former teammate Tony Frick ’05. “He had grit and he was loyal. He always played like he was seven feet tall.”

To Woodson, Whelan’s impact upon the community is one that will linger on.

“People know how much he meant to the community around here,” he said. “It made me take a step back and realize what we have here, because tomorrow isn’t promised, and he lived everyday like that.”

Whelan is survived by his parents, Richard Q. and Virginia Jarvis Whelan, and two younger brothers, Denis and Reid. The Whelan family has asked that any contributions in honor of Ricky be made to the Richard Q. Whelan Jr. Memorial Fund in support of men’s lacrosse at Brown University at PO Box 1925, Providence, RI 02912.

Ricky Whelan, a popular Duke’s player who starred at Brown, passed away in his sleep four years ago.

Ricky Whelan exemplified the quality of player and person the Duke’s wishes to promote and associated itself with, according to the Duke’s coaching staff. Whelan, who played for Ashbee Lacrosse, Episcopal Academy and Brown University, was an Honor student and standout player at Brown where he was voted the team’s Unsung Player as a senior.

Every fall Dukes Lacrosse Club holds clinics in Rickys name to raise money for book scholarships awarded to previous graduating class members that exemplified Ricky Whelans traits on and off the field.